This Plan Spec project was to install a passive cooling system in the 12 GeV Accelerator Tunnel (East & West Arc) at the Thomas Jefferson National Accelerator Facility (TJNAF). During operation of the particle accelerator temperatures in the tunnel often exceeded 135ºF and would not drop to acceptable working levels for a day or more after the beam was deactivated.  This caused lengthy delays for Testing & Research whenever any adjustment or service to the beam was required.

The installed system consists of two 60 Ton Chillers and (132) 8’ Passive Chilled Beams that allow the lab to maintain 95ºF in the tunnel during beam operation. The system continuously monitors temperature and humidity, calculating dew point, and adjusting discharge temperature of water leaving the chiller to 5ºF above dew point to prevent condensation.  In addition to the chilled beams, we installed over a half a mile of pipe along two radial arcs.  This system is the only one of its kind in North America. 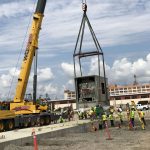